The Free Hanseatic City of Bremen consists of Bremen and Bremerhaven's cities and is located on the Weser River. The centuries-old tradition of seafaring is present everywhere - on a trip on the Weser, the "Maritime Mile" or at one of the ports. The water is also in the foreground when it comes to outdoor activities. Bürgerpark and Stadtwald invite you to relax, while art and culture never get boring. Culinary, you can spoil yourself with specialties like cabbage and Pinkel or Knipp.
Find out more
Outdooractive Editors  Verified partner
Author of this page

Show Map
Bremerhaven
The choices for travelers in Bremerhaven are dazzling and bewildering. Are you looking for some ...
Landkreis Bremen
Discover Bremen far off popular routes and live through outstanding outdoor trips. Need some trip ...

Once through the city 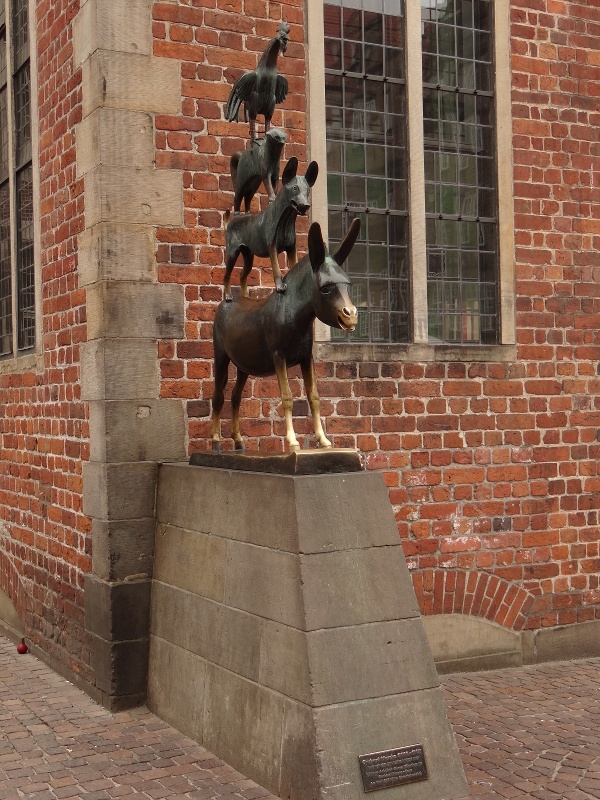 The statue of the Bremen Town Musicians
Photo: Outdooractive Editors

The Free Hanseatic City of Bremen is one of three city states in Germany, along with Hamburg and Berlin, and consists of the cities of Bremen and Bremerhaven, which have a total population of more than 680,000 and are located in the north-west of Germany and are connected by the Weser. A tour of the city is well worthwhile. You will discover the Schnoorviertel with its narrow romantic streets and the smallest house in Germany, which has 4 square metres of living space and a 7 square metre roof terrace.

Additionally, a visit to the imposing town hall, which impresses with its brick Gothic architectural style and has been designated a UNESCO World Heritage Site, is a must when you are out and about in the city. On the western side of the town hall you will find Bremen's most famous landmark – the two-metre-high bronze statue of the Bremen Town Musicians. It was created by the sculptor Gerhard Marcks in 1953. The statue consists of a donkey, dog, cat and rooster – the Bremen Town Musicians, who in the fairy tale of the Brothers Grimm went to Bremen to leave their old life behind and become Town Musicians. The discolourations on the donkey's front legs do not come from anywhere. Anyone who grips the legs with both hands takes home a portion of happiness.

Along the waterfront and through the green nature

A walk or a bike ride along the Weser offers the opportunity to enjoy the maritime flair of the city. The promenade on the banks of the Weser in the old town is also known as Schlachte. You can stroll along it or linger in one of the numerous cafés. You will also come across the Alexander von Humboldt, the famous large sailing ship that has been moored at Schlachte since 2016 and has been converted into a restaurant ship with accommodation. About 25 kilometres from the city centre in the district of Vegesack is the Maritime Mile, which is 1852 metres long and corresponds exactly to one nautical mile. There you can discover historic ships along the Weser, the city garden and numerous monuments and museums.

In addition to the Weser, the large expanses of the Bürgerpark invite you to take a long walk. The park is only a few minutes' walk from the main railway station in a northerly direction. In addition to playgrounds, there is a rowing boat hire service, a mini-golf course and an animal enclosure, so there is something for all tastes.