The Elbe Sandstone Mountains, also called Saxon Switzerland, are a low mountain range southeast of Dresden, which continues on the Czech side as Bohemian Switzerland. The mountain range is characterized by towering and strongly fissured rocks, lush green forests and the Elbe, which flows right through it. The Elbe sandstone was formed long ago from the deposits of a former sea. In the course of time the mountains have impressed and influenced artists again and again.
Read on
Outdooractive Editors  Verified partner
Author of this page 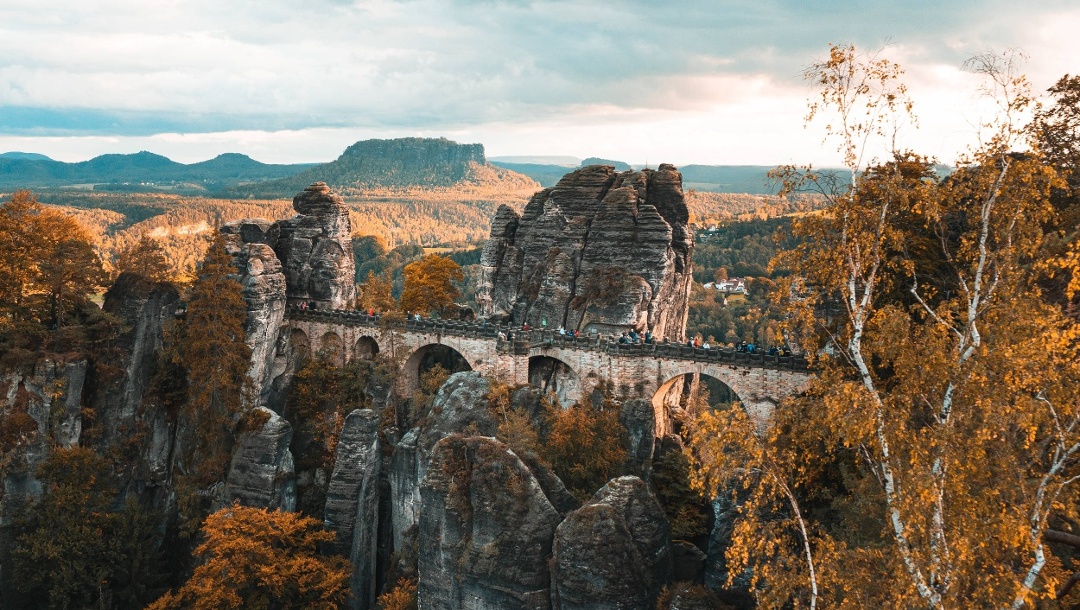 Dog-friendly hiking
Disability access
The Elbe Sandstone Mountains are characterized by an alternation of plains, gorges, table mountains and rocky areas with forests. This natural diversity favors an enormous variety of plant and animal species. A large part of the mountains is protected as National Park Saxon Switzerland. The mountains border the Lusatian Highlands in the east, the Ore Mountains in the west and on the Czech side of the border they merge into the Bohemian Switzerland, which completes the Elbe Sandstone Mountains. The German mountains are usually divided into Front and Rear Saxon Switzerland. The area is named after the Swiss artists Zingg and Graff, who remembered the mountains as their Swiss home.
The Lilienstein in the morning light
Photo: Merops, CC BY-SA, Wikimedia Commons

Sights in the Elbe Sandstone Mountains

To protect the trade routes, some castles were built in the course of time. Of most of them, however, only ruins remain, such as the Small Bastion and the castle on the Falkenstein. Well preserved are still the famous fortress Königstein and the castle Hohnstein. Some of the castles in the area were formerly used as medieval robbery nests.

The most popular excursion destination in the Elbe Sandstone Mountains is the Bastei, the most famous rock formation in Saxon Switzerland. The unique panoramic view offers a view of Lilienstein and Königstein and also the 76 m long bridge connected to the Bastei to the ruins of the rock castle Neurathen is impressive.

The wild beauty of Saxon Switzerland has captivated numerous artists of the Romantic period, who have incorporated their experiences into their works. Well known is of course Caspar David Friedrich's "Wanderer above the Sea of Fog", the opera "Freischütz" by Carl Maria von Weber or the "Lohengrin" by Richard Wagner, but other artists have also worked with the Elbe Sandstone Mountains.
Bastei bridge near Rathen
Photo: Je-str, CC BY, Wikimedia Commons

Activities in the Elbe Sandstone Mountains

The Elbe Sandstone Mountains are considered one of the most spectacular hiking areas in Europe. On about 1200 km of marked trails, hikers are on their way through green forests, mystical valleys, over ridges with best views and past bizarre rock formations. Some paths lead over stairs and ladders, metal steps and grips, so that surefootedness and to have a head for heights are an advantage for a tour in Saxon Switzerland. In summer, there is the possibility to spend the night in the open nature and those who want to get to know the landscape in detail can join a guided hike.

Also cyclists can explore the nature of the Elbe Sandstone Mountains extensively. While the Elbe Cycle Path leads leisurely with a great view of the rocks of the mountains, the routes up into the mountains are demanding and partly rustic. An off-road bike is essential for these tours, but the great views compensate for all exertions.

The Elbe Sandstone Mountains are considered the birthplace of free climbing. Climbing is perhaps the most popular sport on the 1134 free-standing sandstone rocks. There are own climbing rules and there is an own scale of difficulty – the rules protect the soft, sensitive sandstone as well as the habitats of plants and animals. About 27,000 climbing routes of all levels of difficulty lead into the unique world of bizarre rock formations.

Show all offers in the Elbsandsteingebirge

Show all webcams in the Elbsandsteingebirge